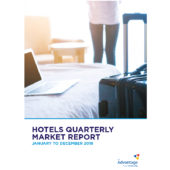 London continues to be business travellers’ favourite capital for work trips with 663,000 room nights booked in 2018, an increase of 5% when compared to 2017. But Edinburgh experienced the highest level of growth in 2018 with room nights booked increasing by 16%, Belfast was up 13% and Cardiff up 5%.

The 2018 Hotels Market Report analyses data from corporate hotel bookings made between January and December 2018 by Advantage’s TMC members, who represent around 40% of the UK business travel sector, highlighting business travel trends and booking behaviour.

The business world continues to travel widely, with the 2018 Hotels Report recording that hotel demand remains strong in many international cities with New York, Auckland, Wellington, Houston, Paris and Sydney topping the Advantage Top Cities list. In total, worldwide volume grew by over 393,000 room nights, a total increase of 8.74% compared to 2017, indicating that SME (Small and Medium Enterprise) corporate accounts, in which Advantage TMCs specialise, continue to perform strongly.

The total number of bookings made by Advantage business travel members in 2018 saw similar growth – up 8.76% – while the average length of stay remained constant, at 1.87 nights. Increased demand and higher occupancy globally meant hotel rates have increased by US$2 to an average daily rate (ADR) of US$169.41.

The report also looks at trends on bookings and ADR for cities and locations around the world, with New York once again topping the list as the highest volume worldwide city outside the UK, with 90,799 room nights booked at an average rate of US$395.97 per night. Increases were also seen in Bangalore (up 54%), Kuala Lumpur (up 36%) and Boston (up 27%).

Neil Armorgie, Global Product Director at Advantage, commented: “It is clear that the corporate hotel sector continues to grow, with another significant increase in bookings year-on-year, made by independent TMCs. Despite continued uncertainty in both the global and UK economies including Brexit, hotel room night demand is at record levels in many destinations, providing a welcome boost for our members.”

“Although not all destinations in Britain saw an increase in room nights booked, ADR remained strong. It is also positive to see particularly good performance in both major cities and regions such as the East Midlands and North East.”

The full report is available to read here.